What is all this I see?

Orthodox worship is different! Some of these differences are apparent from the first moment you walk into a Church, while others become noticeable only over time. Here is some information that may help you feel more at home in Orthodox Worship.

When you walk into an Orthodox Church you’ll notice three levels of ground. The first level is where most of the pews are, facing a wooden structure with icons called the iconostasis. This is where the general congregation stands. At the second level you will notice pews to the left and right that face each other. That is where the deacons stand. They wear regular clothes at the beginning of the service, but later they and the priests don white garments used only for the liturgy. The third level is behind the iconostasis where you will notice three entrances: to the left, middle and right. The entrance on the left is referred to as the, “men’s communion room” because generally during services only men are supposed to enter there. The entrance on the right is called the, “women’s communion room” because generally during services only women are permitted to be in there. In the center you will find the altar upon which, during the Divine Liturgy the bread and wine are placed later to become the Body and Blood of Christ.

Orthodox women cover their hair when in prayer. For women their hair is one of the greatest treasures. Covering the hair symbolizes that God is far more of a treasure than the hair on their heads. St. Paul states in his letter to the Corinthians to, “ Judge for yourselves: Is it proper for a woman to pray to God with her head uncovered? Does not the very nature of things teach you that if a man has long hair, it is a disgrace to him, but that if a woman has long hair, it is her glory? For long hair is given to her as a covering.” (1 Cor 11:13‐15)

Stand Up During Services

In the Orthodox tradition, the faithful stand up for nearly the entire service. In any case, if you find the amount of standing too challenging, you are welcome to be seated. 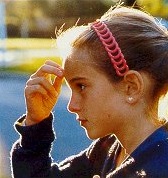 We sign ourselves whenever the Trinity is invoked, whenever we venerate the cross or an icon, and on many other occasions during the Divine Liturgy. But people are not expected to do everything the same way. Some people cross themselves three times in a row. We cross from our right hands from left to right.

To make a prostration we kneel, place our hands on the floor and touch our forehands down between our hands. Not everyone prostrates. Some kneel and some stand with their heads bowed while others sit on pews and bow their heads.

Greet One Another With A Holy Kiss

During the Divine Liturgy the congregation is told to give a “holy kiss” to each other. Put your hands together like your about to clap, but don’t clap! Then spread them apart about an inch. As you see people showing you their hands, simply clasp the right hand of the people near you with both hands as a showing of Christian love for one another. 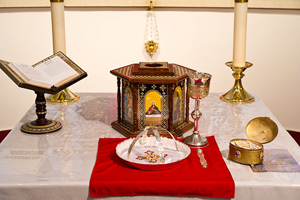 Only Orthodox Christians may take communion, but anyone may have some blessed bread. During the Eucharistic prayer, the bread is consecrated to be the Body of Christ, and the chalice of wine is consecrated as His Blood. We believe that receiving communion is broader than me‐and‐Jesus: it also acknowledges faith in historic Orthodox doctrine. There is nothing exclusive about this; everyone is invited to make this commitment to the Orthodox Church. This practice has been around since the early Church began during the Apostolic era. We believe it is truly the Body and Blood of Christ. We ourselves do not receive communion unless we regularly confess our sins to God in the presence of a priest and are at peace with our communicants. We fast from all food and drink – yes, even a morning cup of coffee – from midnight the night before communion.

The role of the Orthodox priest is much more of a spiritual guide than in other denominations, He is not called by his first name alone, but referred to as “Father [First Name].” Moreover, you might notice that people kiss the hand of the priests. That is because those hands touch the Body and Blood of Christ every Divine Liturgy. 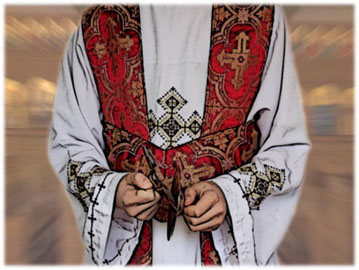 Approximately seventy‐five percent of the service involves singing. Traditionally, Orthodox worshippers are lead by deacons, who use only the cymbals and the triangle. It has been fairly said that the liturgy is one continuous song. Relatively little changes from Sunday to Sunday; for the most part, the same prayers and hymns appear in the same places, and soon you know it by heart and feel as though you are in the presence of God.

Saints And The Virgin Mary

Many people incorrectly assume that we Orthodox Christians worship the saints and worship Saint Mary. We wouldn’t dare! Only God is worthy of worship. We do, however, honor and admire the saints for their accomplishments, as God is now and will forever honor them in heaven. Likewise, we honor Saint Mary because God chose her, among all the women that would ever be born, to be His mother and from whom he would take flesh. The Bible teaches us that “all generations” will call Saint Mary “blessed.” We know from tradition that her body was taken up to heaven because God deemed it too holy to stay on earth, since her body carried the Lord.

Every Orthodox Church has an iconostasis before its altar. Iconostasis means icon stand ‐ it can be as simple as a large image of Christ on the right and a corresponding image of the Virgin Mary and Child Jesus on the left. The Iconostasis shields the altar from view, except when the center curtain is open. When closed, it represents the divide created when Adam and Eve sinned against God. When open it symbolized the reconciliation between God and Man when Christ died on the cross for us. No one is allowed inside the altar unless appointed by the priest to enter. While females are invited to participate in every other aspect of church worship, altar service is restricted to males. Women's contributions have been honored equally with men since the days of the martyrs; you cannot observe seeing an Orthodox altar without seeing St. Mary and other holy women. Women participate in everything else men do: paint icons, teach classes and serve on church councils.

Where Does An American Fit In?

Orthodoxy is the second largest Christian communion worldwide, with over 6 million adherents in North America alone. Though Orthodoxy may seem startlingly different from western traditions, we hold unanimously to the fundamental Christian doctrines taught by the Apostles and handed down through their successors. As time goes by, it will begin to feel more like home and will draw you into your true home, the Kingdom of God. We hope that your first visit to an Orthodox Church will be enjoyable, and that it won’t be your last.

May the Lord grant you peace and happiness and bless you all the days of your life.